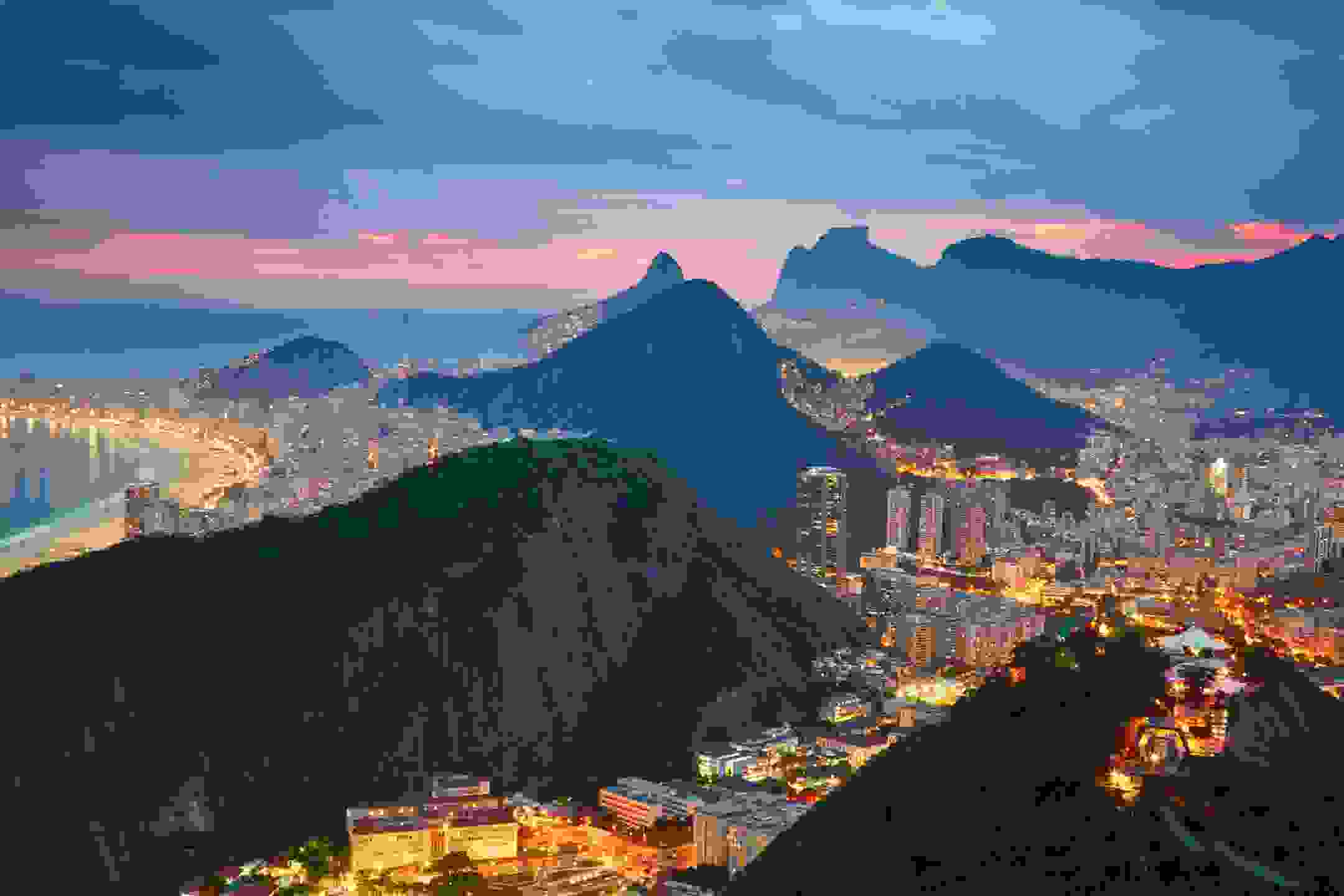 Brazil: the biggest party in the world

Blame it on the bossa nova or the cultural concept of jeitinho (Portuguese for knack), but the Brazilian people just like to have fun. And that devil may care attitude can be contagious for vacationers who venture to this country, one of the largest and most diverse countries in the world. The upside of this attitude is the warmth and friendliness with which Brazilians greet strangers. As symbolized by the famous statue of Cristo Ridentor, the redeeming Christ with arms stretched wide who welcomes all at the entrance to the port of Rio de Janeiro, when interacting with Brazilians, you don’t remain a stranger for very long.

The downside of attitude is one of the highest crime rates in the world. Come see Brazil with both your arms and your eyes wide open.

Getting in, out, and about Brazil

Brazil practices a border policy based on reciprocity. Whatever requirements a country has for entry by Brazilians is the official policy for those citizens to enter Brazil. For US travelers, you have to apply for a travel visa in addition to having your passport up to date and valid for six months beyond the duration of you stay, as supplied by your entry visa. In addition, US travelers must pay an entry fee of at least $160 USD. The amount of the fee is tied to how long your visa runs, with it being possible to be granted a visa for up to 10 years.

In addition to being up to date on the common vaccinations in the US, the CDC recommends that travelers going to Brazil also get vaccinated for Hepatitis A and for typhoid. Depending upon what parts of Brazil you go to, particularly if you enter the Amazon rain forest which covers much of the country, other suggested vaccines include those against Hepatitis B, rabies (if your activities will expose you to potential bat bites), yellow fever, and malaria, which requires treatments before, during, and after your trip. To also avoid contracting other diseases through insect bites, wear long sleeves and pants, and sleep with netting around your bed unless you have a well-sealed room with net screens around the windows. Also, use insect repellant, particularly the kind with high concentrations of DEET (about 24-35% for adults over aged 12) and reapply every five to six hours you spend in an area where you are likely to come into contact with mosquitoes.

Brazil does have a lot of crime. Some of it is also directed primarily at tourists, can be violent, and involve sexual assault. Along the border with Colombia, kidnappings of US citizens have occurred, usually leading to payment of a ransom by either friends and family or the abducted themselves in order to obtain freedom. The areas around Brazil’s other borders are also high in crime.

Most petty thefts rely upon distraction, so remain vigilant when strange things occur or people crowd or bump into you. Large groups of children in many of the cities of Brazil can often turn out to be street gangs and the meanest of the bunch, so don’t let the appearance of youth fool you. Travel in groups yourself, avoid wearing expensive clothing or bandying about expensive cell phones, cameras, or other electronics, and don’t drink anything you haven’t seen poured and had in your direct possession since it was poured. Always call to order a taxi and avoid those that are waiting on the street. Excessive intoxication can make you the low hanging fruit that many thieves look for. While the crime rate is high, being involved in one is not inevitable and quite avoidable if you exercise sensible precautions. One tactic is to pack lightly and buy Brazilian clothing, which is inexpensive, well-made, and distinctive in fashion, once you’re there. If you don’t look like a tourist, you’ll attract far less of the wrong kind of attention.

Driving in Brazil poses its own set of hazards. People drive haphazardly with minimal use of signaling and aggressive moves to get around slower drivers (often ignoring the existence of lanes or even lanes of opposite direction traffic). Even if you are used to driving in other highly trafficked metropolitan areas, expect Brazilian traffic behavior to be somewhat overwhelming, with other cars getting extremely close to each other and to you. Being stopped in places can lead to possible robberies, so it’s not uncommon to see buses and taxis run red lights, particularly at night. If you do plan to drive in Brazil, exercise caution but also be assertive in your own driving. Be sure and purchase the insurance.

Avoid drinking tap water in Brazil. Although it might be safe in some areas in some of the larger cities, it is sporadic. If you must drink tap water, be sure to boil it for 1 to 3 minutes (the higher the altitude, the longer you should boil it) or use water purification tablets. Medical quality in the larger cities is generally good, but not so much outside of them. Purchasing traveler’s insurance is not a bad idea.

Brazilians speak Portuguese primarily. In some parts of the country, you may find other indigenous languages spoken, but even in out of the way parts of Brazil, some level of Portuguese can be found. Do not confuse Brazilians with native Spanish speakers. Do not call them Hispanic, because they will take offense. Although Spanish and Portuguese have many similarities and can be understood to small degrees by speakers of one or the other language, Brazilians consider their culture vastly different from the South American countries who lived under Spanish rule, something that was never the case in Brazil.

English is not a widely spoken language in Brazil. It may be more common in tourist centers, but don’t expect all taxi drivers, for instance, or even most, to speak or understand English. You should learn a few words and phrases in the language to get by, enough to be able to ask for help at the very least. If you come to Brazil without knowing even a little of the language, you can ask hotel concierges, who will often be most likely to speak English, to write down instructions in Portuguese for your driver.

Highlights of a Brazilian vacation

Start planning your trip today to one of the great vacation destinations throughout the world.

The Brazilian unit of currency is the real (pronounced hay-OWL or hay-ICE for plural reals), which is divided into 100 centavos. Exchanging money can be done at Banco do Brasil but not at other banks. Other locations include exchange bureaus, at airports and at high end hotels, although in the case of the last two you get the worst rates.

Your daily expenses can range for as little as R$100 a day (approximately $50 USD) to over R$250 ($125 USD approximately) a day per person, depending on your travel habits. If you stay in hostels, eat cheaply, and limit your entertainment choices, you can survive at the low end of that budget, but for more mid-range hotels, meals at nicer restaurants, and more varied entertainment and travel expenses, expect to hit that higher end. You can easily surpass R$500 a day per person if you want to live it up.

Restaurant workers get paid extremely low wages so tipping at no less than 10% is considered appropriate. Some restaurants include a 10% gratuity added in, so check your bill, but even then an additional tip for good service is welcomed and appropriate. Parking attendants don’t get paid in wages at all and rely entirely upon tips, usually around R$2. You’re not expected to tip taxi drivers, though passengers typically round up to the nearest real.

C.W. Garay is an alumnus from the University of North Texas, where he received both his BA in psychology and an MA in English, specializing in creative writing, fiction. When not traveling he resides in Denton, TX, rated as the number one small town in which to live in the US according to Business Insider’s 2013 survey. In addition to writing articles on traveling, he also writes fiction under a pseudonym. He can be reached via email at cwgaray@gmail.com.